They may well be the islands of your most romantic imaginings. 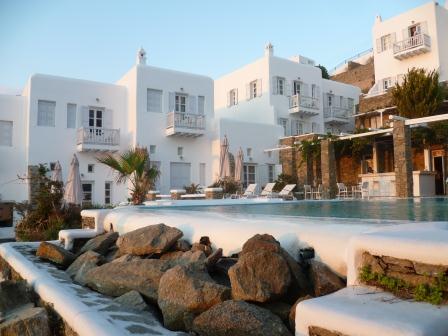 A pocket of the world where the summer sun lingers deep into autumn, where vast expanses of beach intermingle with seductive azure waters, and where you can ramble through the tangle of twisting cobblestoned lanes that lace the lost-in-time villages of exceptional beauty.

If you are a first-timer to the region, the Cyclades group of islands should command your interest, with their two star-performers being Mykonos and Santorini.

If More languid island retreats include Naxos, Paros, Tinos and Syros. But the twin tourist meccas, informally dubbed S&M, must be seen to be believed.

Mykonos is universally feted as the glamour-puss of the Aegean Sea. It’s plethora of sandy beaches , swanky shopping and dynamic  nightlife make this flesh-pot a perennial favourite with jet-setters, socialites and the party-set. It is one of the world’s great hot-spots for babe-watching and boy-gazing. ( And the island boasts a colossal following with the gay community.) Mykonos town is one of the most photographed settlements in the Med. The port town is a sublime example of a Cycladic village – a labyrinth of dazzling cube-shaped  blue-shuttered houses, manicured lanes, pastel-coloured fishing boats bobbing on the water, and a slew of waterside bars and restaurants serving up the finest, freshest sea food.

For a dollop of culture, check out the  Folk Museum which is housed in an elegant sea-captain’s mansion. The museum has a splendid collection of ancient ceramics, embroidery and textiles. 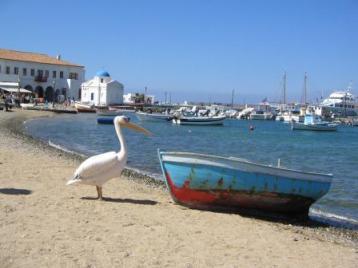 One of the more unusual exhibits is a stuffed pelican. This was the original mascot of Mykonos, and “Petros” wooed the camera-toting crowds for 29 years. The island now has several replacement pelicans schlepping around the cobblestones, ready, willing and waiting to be feted by the tourist.

Also part of the museum is the cluster of 16th century windmills, that are emblematic of Mykonos. One of the windmills has been restored to full working order, and it was one of the 30 mills used by families all over the island to grind corn. 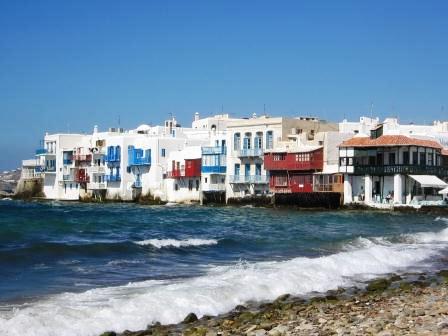 Another essential photo stop is at Little Venice, a fairy-tale sweep of waterfront, festooned with idyllic bars and their front row seats on the booming surf.

I highly recommend stopping by Babulas Taverna, on the waterfront. Adorned with their trademark fishing boat, this husband and wife team has been serving up exceptional seafood dishes for years. There is no better place to sample fried octopus balls and stuffed calamari. 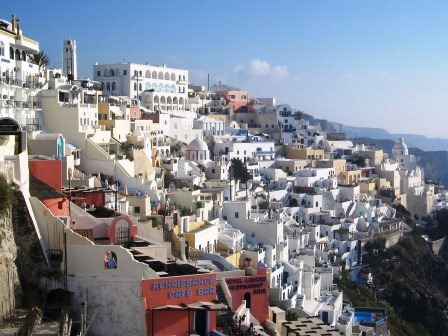 Grab a fast ferry  and hop across to spell-binding Santorini, for a gravity-defying, island experience.

Colonised by the Minoans in 3000BC, this volcanic island erupted in 1450BC, forming Santorini’s crescent shape.  The catastrophic eruption is blamed for the lost kingdom of Atlantis.

The main town of Fira has a birds-eye view on the caldera, ingeniously built on the cliffside, 165 feet above the sea. Terraced into the volcanic cliffs with ornate domed churches and barrel-roofed cave houses, the island is a non-stop photogenic medley.

The terraces are studded with stepped streets and pastel-coloured hotels, restaurants and bars that just look too heavenly to be real.

One of Santorini’s quintessential experiences is to savour a sunset from one of the cliffside bars, on the lip of the caldera. Quench your thirst as you watch the sun slink into the sea, electrifying the gentle waters into a blaze of molten gold.

Another box-ticker is to traverse the donkey trail, that snakes its way up the vertiginous Cliffside. Trust me, the donkeys have a spotless record in completing their cargo’s safe passage! For the unadventurous, a cable car plies the same route.

At the northern tip of the island, Oia is an absurdly beautiful village which is so perfectly painted and manicured, you may well feel like you have entered Toy Town.

Souvenir-hunters are spoilt for choice in Fira, with a profusion of authentic handicrafts on sale. Exceptionally popular items include leatherwork ( particularly the handmade sandals), worry beads and local jewellery, wall hangings, lacework and ornamental ceramics.

Singapore Airlines, the only airline with one-stop connections to Europe from both Auckland and Christchurch, flies non-stop from Singapore to Athens, the gateway to the Greek Islands. www.singaporeair.com

Apanema Resort is my top pick for a Mykonos break. This small, affordable luxury hotel offers an intimate and serene waterfront haven, just a short stroll from the town centre. This boutique hillside resort boasts luxuriant services and facilities, including a picture-perfect infinity pool. Escape the crowds and indulge. A sister resort in Santorini opens next year. www.apanemaresort.com