If you’ve toyed with the dream of driving the Pacific Coast Highway from LA to San Francisco, on Route 1,through Big Sur, set aside a night or two to explore Monterey Bay.

What’s the appeal? Mighty Monterey is a Californian treasure-chest, glistening with some of the Golden State’s finest offerings. Sun-drenched beaches, thunderous Pacific breakers, maritime marvels, absurdly gorgeous homes and a trove of historic treats at every turn. For a power-packed Californian adventure, Monterey is a compulsive stop.

How historic is Monterey? In 1821,when Mexico broke away from Spain’s clutches,  Monterey briefly became the capital of Alta California. Beautiful Custom House, built in 1822, is the oldest standing government building in the state, and serviced the bustling international trading port which lured Russian fur traders, whalers, East Coast Yankees, and merchant seafarers hauling exotic goods from the Orient.

What are the essential sights? Old Fisherman’s Wharf is a photogenic tourist haunt with vestiges from its giddy trading past. By the 1930s, Monterey was the “Sardine Capital of the World, as fishermen capitalised on the bay’s abundance of marine life.

Cannery Row. The tinned fish boom became unsustainable, but “Cannery Row” is a fascinating waterfront precinct that has preserved the industry’s processing buildings. Cannery Row has an edgy, salty feel to it. And the old processing warehouses have been converted into a hot-spot for local artisans, trinket shops and premium hospitality outlets.

Monterey Bay Aquarium The city’s most prestigious visitor draw is unquestionably Monterey Bay Aquarium,  a mesmerising salute to the wonders of the ocean.  To maximise the experience, you’re best to set aside a full day to explore this exceptional attraction, because it is massively-proportioned and utterly magical.  Built on the old site of Monterey’s biggest sardine cannery,  this glorious gallery of sea life runs the gamut from puffins, penguins and otters, to octopus, sharks and sea turtles. There are kid-friendly touch pools featuring starfish, sea cucumbers, slimy slugs and bat rays. Another eye-opener is the colossal kelp forest, which has 2000 gallons of seawater pumped into it every minute, re-creating the natural conditions beyond the shoreline. All feast of feeding shows and behind-the-scenes tours are available, but the king crowd-puller is the truly superlative multi-story Open Sea gallery. Stand in front of the towering glass panels and soak up the unbelievable splendour of thousands of ocean creatures passing by. This is the best “window on the ocean world” spectacle I’ve ever experienced.

The amazing short coastal circuit to Carmel. A supremely scenic coastal journey, that really does deserve to be lauded as one of the world’s best drives, is the Monterey to Carmel coastal route. The oceanside road is a picture-perfect melange of million-dollar beach homes, rocky outcrops pounded by monster-sized breakers, crescent-shaped beaches of white sand, and the vaulting majesty of Californiana Redwoods, and Monterey pine and cypress trees. Thanks to its Mediterranean climate, the blaze of bougainvillea and red hot pokers  accentuates the coastal colour. Carmel is a quaint seaside village, home to Comstock cottages, with stone chimneys and pitched gabled roofs. It’s all very Hansel-and-Gretel. Over 100 art galleries line the main street.

Carmel Mission. This is a major drawcard. Junipero Serra founded the mission in 1770. It was the first of nine missions that spread the Christian word across California. The Carmel mission, draped in colourful flowering gardens is a strikingly pretty historic sight.

Pebble Beach and the gazillion-dollar homes. Pay 10 dollars at the entry station to the gated community, and  traverse the 17 mile loop road which circumnavigates the uber-rich resort extravagance of Pebble Beach. Yes, the golf course which bears the same name is located here, although the world famous fairways and greens actually share Pebble Beach with six other  luxury golf courses. With more lush fairways than you can throw a club at, its no surprise that Pebble Beach is home to some of the nation’s wealthiest retired golfers. 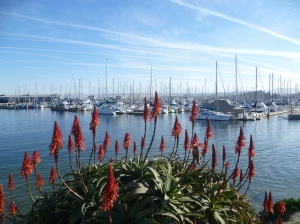 ( As discussed with the Jack Tame Saturday Morning Show on Newstalk ZB, February 2, 2013.)