Just two hours from Paris, if you want a Monte Carlo-esque holiday splash, before riding the rails of the Swiss Alps, Lake Geneva is a unique slice of Switzerland with a stack of great sights.

The land of cheese, chocolate and clocks commands a steadfast hold on the travellers’ imagination. Switzerland’s jaw-dropping alpine scenery is second to none, but if you want to add a bit of holiday glitz to the mix, head to Europe’s largest alpine lake, Lake Geneva.

Sprawling Lake Geneva is encircled by towering alpine peaks; including the Jura mountains to the west, and Mont Blanc to the south. But Lake Geneva has earned the nickname, the Swiss Riviera, because the lakeside cities are so smart and spunky.

What are the key sights in the city of Geneva?

Half of the city’s population are foreigners, predominantly due to the fact that this most international of cities is the world headquarters for a roll-call of lofty entities, from the Red Cross to the International Labour Organisation.

Essential sightseeing starts with the spritzing city landmark, Jet D’Eau. This is the world’s tallest fountain, a gushing sky-high plume that reaches 140 metres in height.  It is a cracking sight around the lake – and can even be seen from the sky by passing aircraft.

And Stop by St. Peter’s Cathedral, which is a hodge-podge of Gothic and neoclassical style. First built 1000 years ago, the Protestant John Calvin preached here in the 16th century.

Situated in Geneva’s atmospheric old town district, another must-see is Maison Tavel, a 14th century house which provides an authentic taste of Genevan life, over the past 700 years.  But it’s the sparkling lake, its manicured flower gardens, extravagant statuary and mouth-watering views of mighty Mont-Blanc that will give your camera a serious work-out.

What about Montreux, across the other side of the lake?

Montreux has long been a playground for poets, playwrights and pop-stars. Often described as the jewel of the Swiss Riviera, Montreux is a lakeside resort with X-factor. Yes, there’s a lot of A-list wannabees who strut about the lake. Lots of gay boys with little dogs, and rich Russian blondes who sweep into town, for a designer shopping rampage. But, surprisingly, you can enjoy Montreux and the passing parade of humanity, inexpensively.

In the 1980s, the front-man for celebrated rock band Queen,  relocated from London to Montreux to escape the jaws of the paparaazi. The locals loved having the superstar as an honorary resident, and he remained living here to the day he died in 1991. Shortly after he lost his battle with AIDS, town officials funded a magnificent bronze statue of Freddie, which takes pride of place in Place du Marche, adjacent to the lakefront.

Is it true that the song Smoke on the Water was inspired by a fire in Montreux?

Heading east from the statue is the town’s modern looking casino. In 1971, during a concert by Frank Zappa, a rocket-flare was fired into the ceiling of the casino, and the entire building was soon engulfed by flames. As clouds of smoke towered above the waters of the lake, Ian Gillan of Deep Purple, who was watching the spectacle from his hotel room, was inspired by the dramatic sight, and Smoke on the Water was the result.

What about Chateau de Chillon?

A short walk further east will bring you to one of Switzerland’s most evocative sights, Chateau de Chillon. This fairy-tale castle is pinned to the shores of Lake Geneva, like a medieval brooch. Built for the Dukes of Savoy in the 13th century, a real crowd-pleaser is the underground prison, which was immortalised in Lord Byron’s The Prisoner of Chillon. 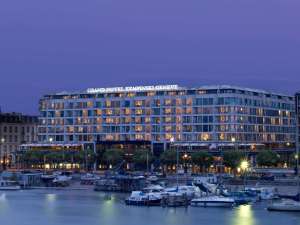 To accentuate the lakeside glam of Geneva, push the boat out and pamper yourself to a night at the gorgeous Grand Hotel Kempinski.  All rooms have floor-to-ceiling windows and feature marble bathrooms. Many rooms offer melt-in-your-mouth views of the Jura Mountains and Lake Geneva. Featuring a variety of lakeside restaurants, My favourites include the Tse Yang, serves superb Chinese cuisine, and Le Grill which specialises in succulent steaks and sizzling seafood. The FloorTwo Bar, a triumph of white leather sofas, dark floors and chrome fittings,  is the picture-perfect place to enjoy some cocktails and drink in the views. All guest rooms boast floor-to-ceiling windows and marble bathrooms. For extra-indulgence, treat yourself to a massage treatment at the hotel’s splendid new Le Spa.