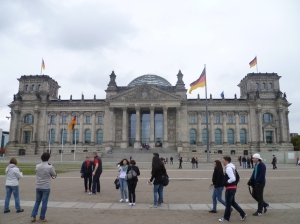 Mighty Berlin, the city that stood at the seismic faultlines of the 20th century, is a city still trying to shuck its sooty Cold War image.  It’s a city of monumentality, a city of many faces, a city in a state of organic transformation, where the vestiges of Nazi and Soviet architecture jostle with pulsating feats of cutting-edge design. It’s been nearly twenty years since I last visited Berlin, and the  first impression was the conspicuous absence of the snaking concrete slabs that formed the Berlin Wall. Gazing down at the footpath, I happened to notice the unobtrusive line of cobblestones, laid to mark the path of the Wall. But if Cold War nostalgia is your bag, beat a path to Checkpoint Charlie, the most famous of border post in old Berlin, where the East and West would face-off in bristling trigger-happiness. Checkpoint Charlie is now the ultimate tourist trap with costumed officers now posing for photographs, in exchange for payment, plus there’s all manner of kitsch Cold War souvenirs for sale.

However, adjacent to the border post is a magnificent open-air art installation which chronicles the history of the partitioned city and includes a huge slab of the Berlin Wall. Take time to reflect in the bewildering maze of coffin-like grey blocks which comprise the Holocaust Memorial. For a more upbeat change of scenery, explore the Baroque magnificence of Unter den Linden, Berlin’s beautiful processional boulevard, flanked by a trove of museums, galleries ,embassies and Berlin Cathedral. Extending east for 1.5km, the grand avenue is headlined by the Brandenburg Gate, the German capital’s most enduring landmark. Constructed in 1791, and crowned by the horse-drawn chariot sculpture, Quadriga, it was here that Napoleon breezed through, to triumph his conquest of Prussia. Adjacent to the Gate is the German Parliament, the Reichstag.  Infamously set on fire, bombed, and left to crumple, the restoration of the building was a potent symbol of Germany’s unification. In the east of the city, all manner of macarbe war nostalgia attractions pack in the tourists. There’s the Stasi Museum and the Stasi Prison, but the old main square of East Berlin, Alexanderplatz, is a major magnet for its austere brutalist architecture, perpetrated by the socialists, and the iconic TV Tower.

Built by the Communists as a symbol of their technological prowess, and modelled on the Sputnik, the tower was once widely- despised as an emblem of a totalitarian regime. But now, it is a much-loved retro landmark and the viewing platform gives you a deliciously panoramic view across Berlin.

But to get a flavour for new Berlin’s muscular approach to urban renewal, check out the new heart of the city at Potsdamer Platz.  This showcase of edgy urban design as drawn some of the world’s finest architects. Amongst the forest of high-rises, a trail-blazing was Sony, who have developed an eye-catching  and interactive emporium of their products in the glitzy Sony Center.  Potsadmer Platz throbs with entertainment venues, sleekly modern galleries and cutting-edge  dining outlets and sure sense of Berlin’s urban pulse. 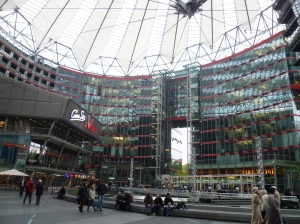 Commanding a prime position by Gendarmenmarkt Square, the Regent Hotel is a classic luxury at its finest, offers Michelin-star cuisine, splendid spa facilities, and something that always earns brownie points from me – free Wi-Fi. Regent Berlin spoils guests with an ingenious gesture of sightseeing assistance; the hotel has created a complimentary app for iPhones and Android systems, which will navigate you around the signature sights. (Search “Regent Berlin“ at the App Store.) The 156 rooms and 39 suites combine sumptuous, traditional furnishings, with top of the line mod-cons and amenities. With the glint of the morning sun stirring me awake, fling open the balcony doors with a movie-star flourish, for panoramic views across bustling Berlin. The marble-clad bathrooms, stocked with luxurious toiletries, feature walk-in showers and deep soaking tubs. Don’t skip the in-house breakfast, which is a graceful and tasty affair. Whether you’re staying in the hotel or not, I highly recommend popping into the intimate Regent Bar, to sample their rare whiskies and fine wines. If you’re looking to celebrate with a gourmet dining experience, Fischers Fritz restaurant has been awarded two Michelin stars – their speciality fish dishes are particularly divine. For further information and to book on-line, go to www.regenthotels.com

Stop for sausages at KaDeWe, Berlin’s landmark department store whose sixth floor is given over to a food hall that eclipses Harrods in the gourmet stakes.

Riding the rails is the best way to explore Germany. You can pre-purchase tickets or a trusty Eurail Pass through Rail Plus. Call 09-377-5415 or go to www.railplus.co.nz