Vancouver is obviously the main gateway. Does it live up to its reputation as one of the world’s best cities?

Captain James Cook sailed into Vancouver in 1778. What must have awe-struck Cook 235 years ago, remains the same today  – the epic wraparound beauty of soaring mountains and sweeping waterways. What a backdrop for a city. I think it’s a cocktail of Auckland and Queenstown’s best bits mixed together. But in addition to nature’s handiwork, Vancouver seems to be in a constant state of festivity, with so many sights, attractions and events, to check out. No question, it’s one of the world’s finest cities, and such a magical gateway to the wonders of British Columbia.

What would you rate as the most memorable Vancouver sights?

No matter what you interests are, Vancouver will deliver. It’s very cosmopolitan. A true world city. But I think the best way to get under the skin of Vancouver, is to live like  a local for a day or two.

Stanley Park is the open-gym of the city.  Grab a coffee and walk, jog or bike like the locals around the park, which offers awesome vistas of the city skyline. Stanley is North America’s biggest urban park with flamboyant garden displays, a striking collection of totem poles, kids farmyard, aquarium and miniature railway.

Then go shopping like a local at Granville Island, once a derelict pocket of the city regenerated and throbbing with market stalls, art studios and quirky boutique stores like the Umbrella Shop. Granville’s Produce Market is an amazing indoor food bazaar bursting with fresh gourmet goodies. And pop into Granville Island Brewery, for a Maple Cream Ale! 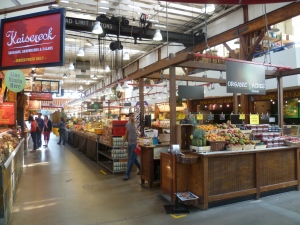 And check out the inner-city neighbourhood, Gastown, the birthplace of colonial Vancouver. It’s now the coolest part of the city to live in, with a revitalised heritage precinct and the city’s best bars.

What about day trips from Vancouver? Capilano Suspension Bridge?

30 minutes north of the city, this signature attraction has been swinging high above the Capilano Canyon since the 1880s. Spanning four hundred and forty feet, this majestic bridge soars above the forest and gorge, and to walk across it, is like floating on air. They’ve recently added some extra walks around the canyon including a very edgy cliff walk. Capilano is a must-do. 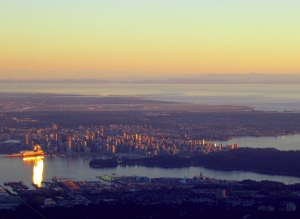 Yes, just ten minutes north of Capilano is Vancouver’s landmark peak, and my favourite haunt, Grouse Mountain. The skyride cable car gets you up to the peak, and the birds eye views across Vanvouver are simply unbeatable. You can ski, snowboard, zip-line, ice-skate, but don’t miss the Grizzly Bear Refuge. It’s unique to Grouse Mountain, and currently home to Grinder and Cooler, two young grizzlies that were rescued after their mother was killed, a few years ago. They generally emerge from their winter hibernation in late April, and you can get within a metre of them for amazing photos. They seem to know how to play to the crowd, and I ended up watching these ferocious balls of fluff, for hours.

Very easy ferry connections from the big city. The beauty and tranquility of the island region has long been a draw for artists. It has one of the world’s most diverse ecosystems with pristine rainforest and one of the world’s premier locations for whale watching. 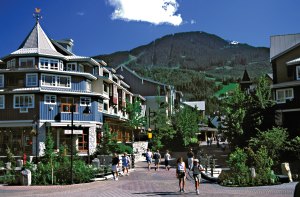 What about Whistler? The Sea to Sky Highway.

A stirring legacy from the Winter Olympics is the Sea to Sky Highway, an engineering triumph, that fuses Vancouver with Whistler, with jaw-dropping alpine coastal scenery. Whistler is the quintessential Northern Hemisphere ski resort, spangled in fairy-lights, gabled roofs and timber-framed lodges. It’s a year round resort, so beyond the winter skiing, you can hike and bike the alpine trails, and shop and nosh from the designer boutiques and restaurants. It’s all very swanky.

You can get to Whistler with the Rocky Mountaineer? Yes, Canada’s most famous train connects Vancouver with Whistler. You can do that as a day trip. But the signature excursion is to cross the mighty vaulting Rockies, taking in some of British Colombia’s iconic lakes like Louise or Banff. I took a trip on the Rocky Mountaineer from Calgary to Vancouver last May, which is definitely the best time to do it, because the mountains are still capped in snow. 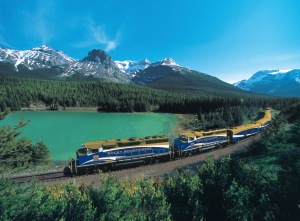 And you could add-on an Alaska cruise? Yes, the cruise season from Vancouver begins in May, and once again the scenery is still snow-capped, the glaciers are calving which triggers spectacular ice flows to festoon the waters.

Best time to go? Well, you may have noticed that the recurring theme is the month of May. To encounter British Colombia at its most wondrous, the month of May is my strongest recommendation.