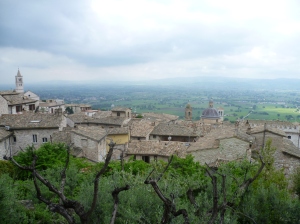 ( Mike’s travel notes, as discussed on the Jack Tame Show.)

There were two key magnets that led you to Assisi, the Pope and disaster, right?

Yes, the new Pope has taken his name from one of the world’s most famous saints, Francis of Assisi, and being a Christchurch lad, I was intrigued to see how well –or otherwise, the hill-top city of Assisi had recovered from its killer earthquakes 15 years ago.

How devastating were those quakes?

They were brutal. And not dissimilar to Christchurch, it was a sequence of earthquakes that ripped Assisi apart, claiming lives in their landmark Basilica and leaving 2 hundred thousand residents without inhabitable homes. So, monstrous devastation.  But this enchanting stone city of rose granite, has been painstakingly re-strengthened and restored, block by block. 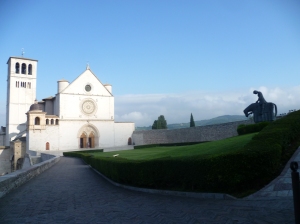 What about Francis? Is his legacy ever-present in town?

It’s pervasive. He is lionised all over town with statues, monuments, mosaics, frescoes and souvenirs of varying quality. The glow in the dark rosary beads and the bobble-head Francis lead the tacky stakes. Of course, as patron saint of the animals, he may well have been the original animal whisper. But before he devoting his life to God and the poor, he was quite the lad. A lethal soldier, big drinker and womaniser. Discovering his life story, and walking in his footsteps, in Assisi, is profoundly fascinating.

What is Hell Hill?

The lofty mound on which Saint Francis Basilica was built is now known as Paradise Hill. But when Francis was alive, it was called Hell Hill, because it was where the public hangings took place. It was like Assisi’s Golgotha. And Francis insisted that when he died, he was buried on Hell Hill. He was, and within a couple of years, the masterpiece Basilica was built around his crypt. To view his tomb, get there early in the morning, before the sweaty, stampeding mobs of tour groups swamp the place. 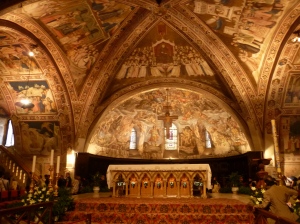 Aside from St. Francis Basilica, what are the key sights?

There are self-guided walking routes that connect up all of the historic Francis sights. Where he was born, where he died, where he talked to the animals and so forth. Smack bang in the heart of town,  Cathedral Rufino features the font that he was baptised in.  But being a hillside medieval stone city, Assisi is such a nice place to stroll around. The setting sun makes the rose granite buildings positively glow, so your camera’s memory card will get a hell of a work out.

What about the main piazza?

The central piazza is Assisi’s photogenic social nerve centre. Bustling cafes spill across its cobble stones. The frothing Lion’s Fountain is the kind  of renaissance water feature we’d all love in our back yard. And check out the spectacularly preserved Minerva temple. It was built in the first century BC and was later coverted from being a pagan temple to a Catholic church. 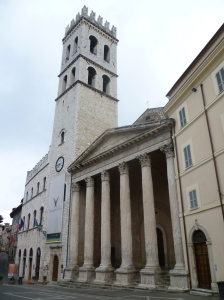 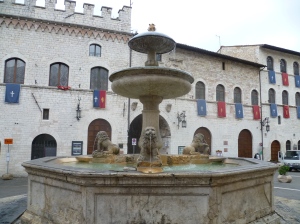 Stretching out from Assisi, the landscape is a mix of rolling fertile farmland, interspersed with gentle hills and then larger mountains like Subasio. So, Assisi is hugely popular with hikers and trampers. And there are a series of caves, where Francis and his followers would meet to pray and preach, and generally hang out. Some Franciscans still live in the caves.

Yes, I stayed in a small hotel in the piazza, and the new late-night trading hours have divided the locals. The cafes in the piazza can now stay open until 2 in the morning. But, I have to say…even though it is noisy if you are a light sleeper, you won’t find broken glass, vomit and other unmentionables littering the piazza, when the sun comes up. They’re a dam sight tidier, than us.

On his deathbed, Francis requested some special almond cookies, called Mostaccioli, which he apparently adored. They are now known as Francis cookies in Assisi, and I managed to snaffle a copy of the ancient recipe off the hotel owner. They are divine!