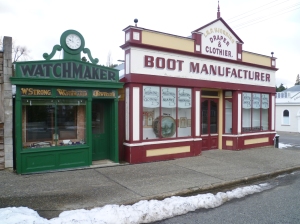 Much snow down there still? An astounding amount of snow, which is taking forever to melt around people’s houses. Naseby and the Maniototo district looks like a winter wonderland. The boss of the Royal Hotel in Naseby showed me just high the snow drifts piled up a week ago. It was above the windows, so Naseby has been the world capital of snow shovelling in the past week. And I have to say, those gorgeous Maniototo landscapes of golden tussocks and stacks of schist scattered across the countryside, look all the more gorgeous when they’re touched up with a bit of mother nature’s seasonal tinsel. The garlands of snow across the countryside is Christmas card perfection. 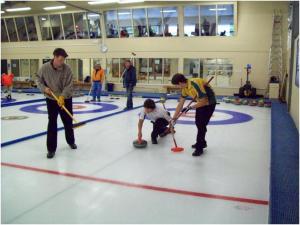 The Curling Craze. How did that come about in Naseby? How easy is it to get the handle of? Well like for virtually everything in Central Otago, its origins can be traced directly to the goldrush. And it was gold prospectors from Scotland, who were responsible for unleashing the curling craze and whisky swilling in Naseby, in the 1860s.  Of course, curling can now be played year-round, indoors, at Naseby’s International Curling Rink. Or you can play outdoors in winter,  on the natural ice rinks.

Degree of difficulty? Well, think lawn bowls on ice, and you’re on the right track. A curling instructor gave me a beginners lesson, and it’s pretty straight forward. Those smooth granite stones slide across the ice, with an easy grace. And of course, if you’ve ever wondered what the broom sticks are for, the idea is that you sweep the ice in front of the stone to smooth its path to the tee.

The ice luge. Very popular? Yes, well adding to Naseby’s credentials as a winter sports mecca, the Naseby Luge is the only one of its kind in the Southern Hemisphere. It was built five years ago, its three hundred and sixty metres long, and the racing sleds hit speeds around 70k.  Hurtling down the track in Cool Runnings style, does require some knowhow.  I wussed out, and didn’t do it. I had visions of personally humiliating myself. But I happily watched. If you want to give it a go, the luge is open until the end of August, and the sessions always include training and supervision.

The Black Forest. Great for bikers? Mountain bikers consider the Black Forest seventh heaven. The forest is actually privately owned, but the recreation area encompasses fifty kms of tracks, up hill and down dale, through the exotic Northern European style forest. Once again, in winter, this forest resembles a Northern Hemipshere Christmas card, whith towering spruces, firs and cedar trees draped in snow. 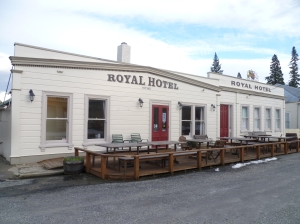 Stay at The Royal Hotel. I really think Naseby is the most charming of Otago’s gold rush settlments. It exudes an authentic Shanty-town flavour.  Gold was discovered here in 1863. Within a couple of years, five thousand gold diggers lived here, and the village boasted over twenty pubs.Most of them are long gone, but the Royal Hotel is an absolute gem, built in Kauri, in 1863.It has bags of character and atmosphere. Jill and Peter have been running it for the past year or so, and its such a great place to stay. A cracking open fire, tasty meals, comfy accommodation and a great way to meet the locals.

Would you recommend driving Danseys Pass? I think it is one of New Zealand’s epic mountain roads. It’s not for the faint-hearted, but you’ll feel an enormous sense of satisfaction when you have completed it. Connecting Central Otago with the Mackenzie Basin, the pass cuts across the Kakanui Mountains. This classic unsealed alpine pass, which was built by goldminers,  travels directly through high country paddocks, so the flocks of aimlessly wandering sheep, will keep you on guard.   It is wilderness unplugged. A real highlight is the Danseys Pass Coaching Inn, which was built in 1862 by miners, in exchange for free beer. And keep an eye out for the big fat friendly labrador on the verandah, who acts as a four-legged welcoming party for visitors to the inn.

What about neighbouring Ranfurly? Yes, just 10k from Naseby, Ranfurly is the main service town in the Maniototo, alongside the Otago Central Rail Trail. The town was monstered by a spate of arson attacks in the 1930s, so most of the shops and buildings were reconstructed in Art Deco style, which, like Napier, has given the town its signature appeal. Well worth a stop. 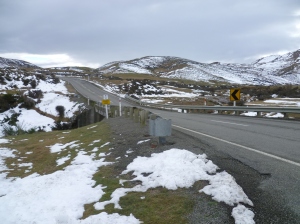 Road tip, the extra scenic route to Naseby is the Pig Route from Palmerston. Yes, the region is loaded with salivating options for road-trippers. If you’re approaching Naseby from the East Coast on State Highway 1, head inland from Palmerston on Sh85, which is known as the Pig Root.The reason for that is the area was overrun with wild pigs that were completely unafraid of people, when the goldminers swooped on Central Otago. The Pig Root was the main route to the goldfields, and just past Palmerston is a stunning stone arch bridge, built from schist in the 1860s to service the coaches. A great stop.