Most visitors to Cairns can’t wait to get out of the place.  Is that fair on the city?

Well, it’s understandable, given Cairns is the kind of city that the very term ‘gateway’ was coined for. North Queensland’s tropical wonders are right on the city’s door, including the rare distinction of straddling two World Heritage-listed attractions; the Great Barrier Reef and the tropical rainforest. But if time allows, don’t skimp on Cairns itself, which is similar in size to Tauranga.

What’s worth checking out in Cairns?

The city centre faces out on lovely Trinity Inlet, a tranquil buffer from the ocean. Along the waterfront, millions of dollars has been lavished on the very snazzy promenade which includes a glitzy new exhibition centre and the fantastic manmade beach lagoon, which is like a designer waterhole. You can visit to the Royal Flying Doctors base, which services a vast chunk of outback, the size of New Zealand.  The  Tank Arts Centre has ingeniously transformed massive World War fuel-storage tanks into a gallery of local art. And the Aboriginal Cultural Park is great for families. The boomerang and spear-throwing demonstrations, are a smash hit with the kids.

What about the Wet Tropic World Heritage Area?

Just fifteen minutes north of Cairns, you’ll be at one with nature, in the Barron Gorge National Park, which is world famous for the Kuranda Skyrail, a 7 kilometre long cableway that traverses the treetops of the national park, with a  couple of stops along the way, where parkrangers will guide you along the boardwalks and point out some of the forests treasures.From the air you will see fern-like Cycads, some of them many hundreds of years old.  Enjoy views over Cairns, the hinterland and out to the Coral Sea.  At Red Peak take a walk around on the wheelchair & stroller friendly boardwalks. Take your time to stand in wonder in front of the 400 year old Kauri Pine, and learn why a certain palm is called ‘wait-a-while’. After exploring Red Peak it is off to Barron Falls Station. On the way you will glide just meters over the top of the canopy so you can really be at one with the rainforest –  breathe it all in. You will notice the famous Basket Ferns have made themselves at home in the branches of many trees, including the spectacular Banyans. Barron Falls Station also features  an interactive learning centre. It’s well worth a browse. There is a great exhibit of the highly endangered  Cassowary bird. Your final stop on the SkyRail is at the Kuranda Terminal. Be sure to make some time to browse the shops and markets  in Kuranda, which is  known as the ‘Village in the Rainforest’. There are lovely art and craft shops here, a superb butterfly sanctuary and bird aviary.

The SkyRail has a link with the “Avatar” movie, right?

Yes fun fact of the week. James Cameron was so enchanted by the skyrail ride over the rainforest , that it was the inspiration for the floaty opening sequence in the movie. As you glide across the canopy, keep an eye out for the queen the rainforest, the brilliantly big blue butterflies, called Ulysses, which also feature in Avatar.

Have an up-close encounter with a Cassowary bird. Big, brutal 2 metre tall birds.

Yes, the national park is home to the Southern Cassowary, which is highly endangered and is actually a slightly smaller version of our extinct moa. These flightless birds weigh 85kg. They are big buggars, and even though they are naturally shy, if they’re provoked, they will retaliate ferociously. They often kill dogs. And seriously injure people. So, for gods sake, don’t touch them.

Further up the coast is Port Douglas. You think it’s over-priced and over-rated?

Well, it’s very nice for a daytrip, but much of the resort town was developed by the property cowboys of the late 80s, and it just feels very plastic and pretentious. The notorious Christopher Skase, the liberace of bankcruptcy, was the lead developer. He even imported nine thousand  Arab Date Palm Trees to Port Douglas, because he believed that the local palm trees looked too gaunt. Like many Australian towns, Port Douglas was first settled as a gold-mining town. A century ago, the town boasted 14 pubs. But after the goldrush, and the rise of Cairns as a major trading hub for primary produce, Port Douglas largely faded from the consciousness. By 1960, it had reverted to a sleepy fishing village.  Skase believed Port Douglas could become a top-end tourist honey-pot, and went about developing colossal visitor infrastructure including the glitzy Sheraton Mirage Hotel. years on, Port Douglas is indeed a deluxe holiday hot-bed. Just 70 kilometres north of Cairns, along the spectacularly scenic Cooks Highway, take a day-trip to this swanky leisure resort village. Nestled at the end of a peninsula, the village boasts a glittering marina, while the other side of the peninsula features the breathtaking sandy sweep of Four Mile Beach. Soak up the sunshine, stroll among the village shops, galleries, historic buildings and the seaside Sunday market. For all of its pretence, Port Douglas has retained and revived much of its colonial architecture. The  Court House Hotel, with its wide open verandahs and dazzling coastal views is the perfect stop for a sundowner.

What about Palm Cove? Just before you reach Port Douglas on the Cooks Highway, Palm Cove is a far more laidback, authentic, affordable beachside town. Just 30 minutes north of Cairns. 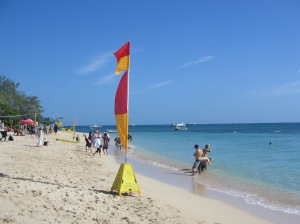 Absolutely.  The Barrier Reef has so many evocative options. Brampton, Daydream, Dunk, Fitzroy and Great Keppel, and on the list goes. But if its your first foray with the Barrier Reef, Green Island is a gem, and so easy to get to from Cairns, just a 45 minute boat ride. Encircled by a white sandy beach and crystal-clear water, the marine life is amazing. You can find Nemo and his friends flitting about, turtles, giant clams, starfish and shells.  The snorkelling is easy, or if you don’t want to get wet, soak up the sights from the mini-submarine  tours that trawls the waters.

Best time to go? April to October for the sunniest weather and low humidity. September is best, because the three week long Cairns Festival really brings the city to life.