It’s a right royal good time to pay a visit to London, as Britannia basks in the glow of a new blue-blood baby. Revel in the arrival of a new royal in style, by threading together the monarchy’s marquee attractions into one sizzling London itinerary. In a city of such rich with royal trappings, history announces itself at every turn. Set aside a day for the big set-pieces, like the Tower of London, Westminster Abbey and St. Paul’s Cathedral. If you’re travelling before the end of September, Buckingham Palace is open for inspection. Her Majesty’s official residence is not the prettiest of royal residences from the outside, but the State Rooms of the palace are a knock-out.  19 lavishly furnished rooms with richly gilded ceilings are open for the commoners, including the velvet and gilt trappings of the throne room. For full-tilt pomp and pagentary, what could be more quinitessential than  Changing of the Guard? Bag a prime spot by arriving early for the summer start time of 11.30am, featuring the  daily marching ceremony and handover of the palace keys to the incoming sentry guards.  Adjacent to Buck house, the must-see Royal Mews is  a working stable and coach house, home to several dozen royal horses and a staggering fleet of state coaches and royal vehicles. The show-stopper is the ornate gold state coach which has carried every incoming monarch to their coronation since 1762. 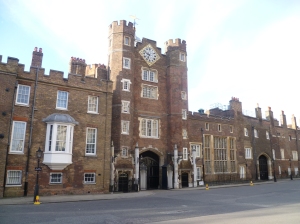 Flanking The Mall, Clarence House and St.James’ Palace are popular photo stops.In fact, Clarence House, home to Charles, Camilla and Harry,  has now been opened for daily tours in the summer months. And make time for Kensington Palace, tinged with the memory of Diana. Currently on show, an exhibition devoted to the life of Victoria, including her wedding dress. In 1837,the young Princess  was awoken to be told that her uncle William had just died and that she was to be queen. Her well furnished bedroom remains on display, as it was on that monumental day. Cap off your rich regal pickings with a High Tea at the royal grocers, Fortnum & Mason. Since 1707, this Piccadilly institution has been a purveyor of superb quality tea, diversifying in 1926 by becoming a luxury department store.  To commemorate the Queen’s 60 years on the throne, last year, Fortnum’s storied tearoom was renamed the Diamond Jubilee Tea Salon.   Within the lush confines of this gilt-edged space, High Tea at Fortnum’s is a fairytale treat, with tiered-stands tumbling with tasty morsels that resemble artworks. Finger sandwiches include cucumber with mint butter, coronation chicken and rare roast beef with gherkin and caper dressing.  Add to that, the coronation cake carriage, washed down with the finest tea and bubbles. High Tea at Fortnum’s is an experiential must. www.fortnumandmason.com

The Dorchester has enjoyed an enduring relationship with the House of Windsor, since its doors first opened in 1931. Lording over Hyde Park, the Queen and her cortege dressed for her family at the hotel, in 1947. And in a property that has enjoyed a spooling reel of high-life moments, Prince Charles famously threw many of his batchelor parties at the hotel.  Add some fairy-dust to your London stay, by spending a night in this lush and lavish hotel.  It’s such a magical venue to celebrate a special occasion, in a room ripe for romance. The hotel is undertaking a multi-million dollar makeover to its guestrooms, an exercise in designer ballet, whereby the timeless glamour is preserved and fused with contemporary touches. I spent a night in a recently refurbished Park suite, a glorious expanse of luxury, now much lighter with the previously dark furnishings stripped back. The Dorchester boasts some headline dining experiences, that non-stay guests are most welcome to enjoy. China Tang offers traditional Cantonese cuisine, while three Michelin star Alain Ducasse at The Dorchester is  French dining, in excelsis.    For tasty British cuisine, head to the the boldly-decorated Grill,  and the Bar is a cocoon of seduction, complete with private booths. But my favourite public space is the sweeping Promenade, the central living room of the Dorchester, enlivened with coral-coloured silk draperies and gold-framed mirrors. Pop in to enjoy a snack or kickback with a cocktail and breath in the grandeur. www.thedorchester.com 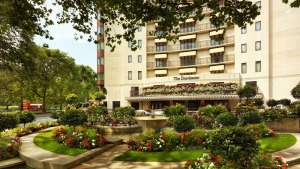 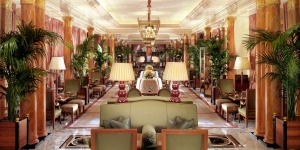 British Airways has been flying Down Under for 77 years. In April, they introduced their brand-new Boeing 777-300ERs to the Sydney-London route via Singapore with the latest cabin upgrades. From New Zealand, the connections to Sydney on Qantas are precision-timed so that your layover is kept to a minimum. For competitive airfares and further information, see your travel agent or jump to www.britishairways.com

Visit Britain’s on-line shop is an outstanding site to pre-purchase London travelcards and a variety of sightseeing tickets, before you leave home. www.visitbritainshop.com/australia