Super easy. If you are Europe bound and dropping into Hong Kong, Macau is like a stopover within a stopover. Handily located less than an hour away by fast ferry, you can even get direct ferries to Macau from Hong Kong Airport. 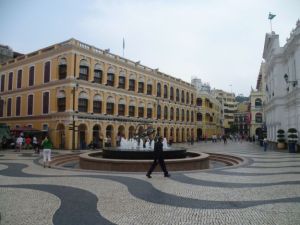 When did the Portuguese rock into town?

Macau is situated at the mouth of the Pearl River and was initially part of the Ancient Silk Road with ships loading here with silk bound for Europe.  In 1513, Portugese merchant-explorers first arrived, and decided it would be a great base for Asian trading, so a few decades later, they acquired Macau off the Chinese mandarins and transformed it into Asia’s greatest port. 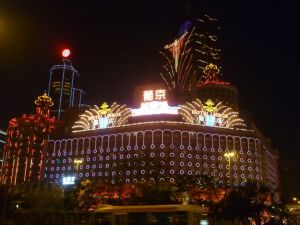 Since handover 1999, how has Macau changed?

Stanley Ho’s cushy casino monopoly went the same way as Saturday trading at New Brighton. It ended. Since handover, the explosion in casino resorts has been immense, chiefly led by all the big brands from Vegas branching out. So, the Venetian, Wynns, Sands and MGM have all prowled into town, with their bright lights and bling spangling the skyline. They’ve even got an imitation Bellagio singing fountain in Macau. The big difference with Vegas is that the Chinese punters far prefer playing roulette and blackjack, so the casinos are dominated by gaming tables not the pokies. But Macau is undoubtedly the Vegas of Asia. 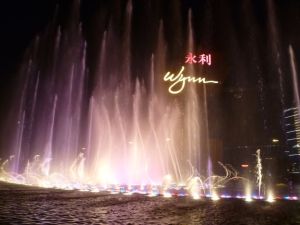 What about their International Fireworks Contest?

Two monster signature events dominate the city’s calendar. The Macau Grand Prix, which will be celebrating its 60th this year, roars back into town in just a couple of weeks time. The more recent showpiece event, which has become an annual extravaganza is the International Fireworks Contest. It is pyrotechnic paradise, the biggest load of bangers on the planet. More bang for your buck than Benghazi or Baghdad. Over a hundred international teams battle for supreme honours, with creative, artistic fireworks displays lighting up the night sky for several weeks, every September.

You came across a quirky museum, right?

The city has a surprising range of interesting museums, but the most astonishing is the Handover Museum. I know the name doesn’t promise much, but it comprises a vast collection of gifts, that were given to Macau by every Chinese province, as a welcome home present, in 1999. There are all manner of gifts from provincial governments, but my favourites are the vases made from five thousand walnut shells, and the jade sundial, encircled by nine dragons. Well worth a potter. 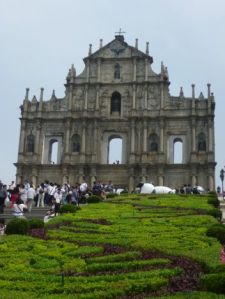 What are Macau’s must-see landmarks?

The Portuguese rulers are long gone, but their lasting legacy is the lavish Mediterranean  architecture that speckles the city.  I love Macau’s old, twisting, narrow streets that lead past historic churches, temples, forts and mansions. The historic centre of Macau is a world-heritage site. Leading off from Senado Square, follow the wavy-patterned mosaic tiled pathway up to the Ruins of St. Pauls, Macau’s enduring letterhead and most photographed site. The locals regard it as the city’s altar. The towering church facade is all that remains from the original Catholic church, which was built in 1602. It was designed by an Italian Jesuit with the help of Japanese Christians who had fled persecution in Nagasaki. In 1835, during a typhoon, the church caught fire and burned to the ground, leaving only its now-famous facade. The facade is adorned with carvings and statues depicting Christianity in Asia, a rather intriguing mix of images: a Virgin Mary flanked by a peony (representing China) and a chrysanthemum (representing Japan), and a Chinese dragon, a Portuguese ship, and a demon. Beyond the facade is the excavated crypt, where in glass-fronted cases are the bones of 17th-century Christian martyrs from Japan and Vietnam. Here, too, is the tomb of Father Allesandro Valignano, founder of the Church of St. Paul and instrumental in establishing Christianity in Japan. To the left of the church’s ruins are tiny Na Tcha Temple and a remnant of Macau’s old city wall, which, along with St. Paul’s Church, are among the 20-some historic structures protected collectively as a World Heritage Site.

Even older is the A-Ma temple, Macau’s oldest Chinese temple , and longest surviving building. Built over 6 hundred years ago, it pre-dates the arrival of the Portuguese.Parts of this temple, dedicated to A-Ma, goddess of seafarers, date back more than 600 years. According to legend, a poor village girl sought free passage on a boat but was refused until a small fishing boat came along and took her on-board. Once the boat was at sea, a typhoon blew in, destroying all boats except hers. Upon landing at what is now Barra Hill, the young girl revealed herself as A-Ma, and the fishermen repaid their gratitude by building this temple on the spot where they came ashore.

Hurtling into the 21st century, the Macau Tower is newsest landmark on the block. If it you think it bears an uncanny resemblance to the Sky Tower, it’s probably because it was designed by the same team. Copy catting seems to be a pastime in Macau. Their tower is slightly taller and its home to the highest commercial bungy jump in the world. 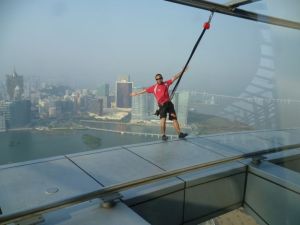 What about the Street of Happiness?

I always like checking out a famous movie location, and Rua de Feliciadad is where to head in Macau. Now this street featured in Indiana Jones and the Temple of Doom. It’s a very coliyrful street, lined with red-shuttered terraced houses. Traditionally it was the throbbing heart of the red-light district, but it’s been decidedly tarted-up in recent years.

Where should go first thing in the morning?

Tear yourself out of bed at the crack of dawn and head on down to Lou Lim Iok Garden. By daybreak, this Chinese garden is teeming with locals,  practicing tai chi, playing traditional Chinese music and  taking their pet birds for walks in cages. Very authentic. Very Macau.

What about the local cuisine – Macanese?