Last week you talked about the main island of Tahiti. What about further afield? How many islands can you explore?

French Polynesia spans a large slab of the Pacific. It’s home to one hundred and eighteen islands, scattered over an area ,equivalent to the size of continental Europe. You can easily get to over fifty islands with Air Tahiti,  many of which are far-flung and off the beaten track.

Tell us about the freighter cruises to the outer islands.

In addition to Air Tahiti, another really interesting option ,to check out a range of French Polynesian islands, is to jump on board Aranui 3. It’s principally a freighter, but can accommodate two hundred passengers in cabins. A two week voyage from Papeete will take in about 8 different remote islands, if you want to explore Tahiti with  a twist. 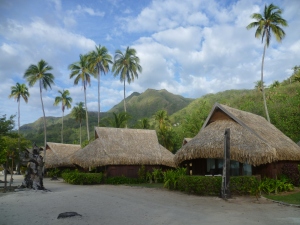 Now, Moorea.  Who will it appeal to?

It’s just 19k west of the main island of Tahiti, so Moorea is a very quick bunny hop to holiday island bliss, and it’s particularly suited to families, because so many of the hotels are equipped with kids clubs and family-tailored activities.

Indeed. Motus are magical little white sand islets that speckle the lagoon, like pop corn. It’s like your own little pocket of paradise. Pack a picnic and park up on one of these motus, under a coconut palm. All of the hotels will arrange picnic hampers for you. 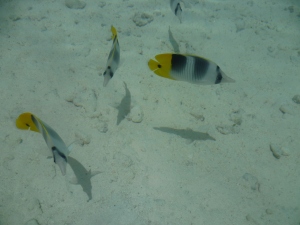 How amazing is the water?

Beyond belief. I have never seen such a stirring spectrum of aqua hues, the lagoons are totally translucent and they throng with coral gardens and tropical fish. In fact, the lagoon water is so shallow, calm and crystal-clear, that you don’t even have to snorkel to marvel at the underworld.

What about Moorea’s dramatic interior?

Well, this is what gives Moorea its all-round appeal. The beaches are amongst the best in the Pacific, but rising up from the turquoise lagoons are a series of mystical, jagged mountains, like wizard’s hats, cloaked in lush emerald forest. They are laced with awesome bush walks, waterfalls, and there’s great caves for spelunking. One of the best walks takes you to the sky-high lookout across Cook’s Bay, which of course is where Captain Cook came ashore. 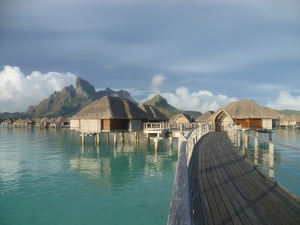 Indeed. Weddings and honeymooning are the two big magnets that drawer the world’s love birds to this remarkable little island. It’s a ninety minute flight from Papeete. Flying in, it looks too perfect to be real, as if it was created by a giant 3D printer and touched up by photoshop.

Of course it is the world capital of overwater bungalows, and all the big resort brands like Four Seasons and St. Regis are constantly trying to outdo each other. But for the ultimate in five-star island lux, this is our Maldives. Bora Bora is the bomb.

You can swim with all manner of sea creatures at Bora Bora. Turtles, dolphins, rays and sharks. But it’s all of Nemo’s mates, all of those techni-coloured fish that are so engrossing.

Tell us about the marine biologist you met who is re-building coral reefs.

Something which really impressed me about the Four Seasons Bora Bora Resort is they have employed a marine biologist, who devotes a lot of his time to rebuilding coral gardens, to support marine life.  Oliver Martin is a world-renowned authority, and as I mentioned to Andrew last week, this is the fella who recently taught an octopus how to unscrew the lid off a jar. I spent half a day with him, and learnt so much about Bora Bora’s amazing eco-system.  He hosts free lagoon tours every day, which is a must do.

Something really special about French Polynesia, is unlike other parts of the Pacific, there are no nasty buggars like box jellies sea snakes in their waters.

At the Lagoonarium, you will not only see, but actually interact with the amazing creatures of the Bora Bora lagoon as you swim alongside them with an experienced underwater guide.  All the creatures you’ve seen pictures of and heard about are here: Turtles, dolphins, sharks and rays, tropical fish in dazzling volumes.

When’s the best time to go?

It has become a year round destination, although May to September is best. Low humidity, cooler temps and lots of sunshine.

However, in the rainy season, from November to March, hotel prices are cheaper, if you are prepared to put up with hotter, more humid conditions.