You don’t strike me as a coach tour kind of traveller. Is it for everyone?It’s a damn good question because I had a stack of pre-conceptions that this might be a hokey, stuffy coach tour with a pack of disparate high-needs tourists, always running late and leaving their passport behind in the hotel safe. But as long as you’re prepared to be sociable, it is certainly an interesting hassle-free way to explore the world, and chances are, within days, the magic glue of camaraderie will have bonded the group together, and you may well make friends for life.

What tour have you just done?

Insight Vacations hosted a group of 20 international media to familiarise them with their Country Roads programme. There’s a variety of itineraries, but our week long tour focused on Italy’s green heart of Umbria and Tuscany. What really impressed me was the routing hugged secondary, country roads, not the auto strada. So in between stops, Italy’s sensational countryside was always to the fore. The Tour Director was a font of knowledge and a passionate story-teller. And Insight Vacations pride themselves on connecting you with the authentic locals, flavours and experiences within the destination you’ve chosen.

Let’s look at some of the highlights. Orvieto?  Just 90 minutes north of Rome, this stirring hill-top town is the spiritual home of the Etruscans. Firmly established well before the rise of the Roman Empire, the Etruscans introduced the toga, the archway and olive trees to Italy. The town is a jewel-box to explore, and a top drawer is Lorenzo the Etruscan Chef, who runs his own restaurant and cooking school in Orvieto, and is a big hit on US television with his pasta dishes.

What about Cortona? Isn’t that “Under the Tuscan Sun” country?

Indeed it is Jack. Frances Mayes would be proud of you. And one of the hidden gems of the tour was the chance to see her villa Bramisole, in the flesh, which is located close to Cortona, down a sleepy country lane, lined with cypress trees. Cortona itself is another stirring hill-top town with sensational scenery.

Many visitors to Tuscany consider this town the pick of the bunch. It’s like a medieval Manhattan with soaring stone towers. And it’s home to some amazing characters who you can meet, like Sergio, who has been crowned the world’s No.1 gelato maker, multiple times. There are thirty five thousand gelato shops in Italy. This champion shop is in the heart of town , his zero-fat gelato is divine and he concocts daring flavours like rosemary and raspberry. Pan Forte, which Italians devour at Easter and Christmas is a San Gim creation, initially produced as medieval scroggen  or an energy bar for the Crusaders. 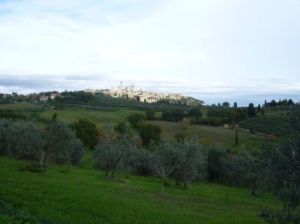 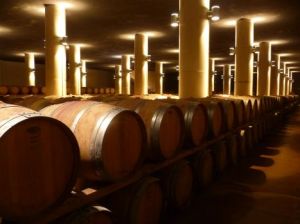 They’re home to Tuscany’s most ravishing landscapes of toasted farmhouses, the gentle contours of the hills, and the perfectly designed patchwork of olive groves, vineyards and cypress pines. Poppies in spring, sunflowers in summer.  It’s where landscape design as we know it, originated. And of course Chianti wine is world-acclaimed. We went to the Mazzei Estate and met the Count, Francesco Mazzei who heads up the 24th generation of the Mazzei wine family, who have been producing sumptuous vino since 1435.

Did you come across many food artisans? A spooling reel of producers and purveyors. From gelato and wine to olive oil and prosciutto ham. And this is what I thought was the tour’s magical edge. Its ability to connect you with farmgate fresh produce and the local food artisans. It would be very hard to meet the parade of producers, independently.

Who would the tour appeal to? When’s the best time?

It definitely appeals to travellers who want to scratch deeper into Italy’s surface and cherish authentic experiences. It’s like seeing Italy through the eyes of the locals. Plus, the country road routing serves up extraordinary scenery. So as long as you are prepared to give up some of your independence for a guided journey, you’ll love it. And the tours operate year round. I have to say mid-November has been terrific. The weather has been mild and the towns far less crowded.

For further information go to http://www.insightvacations.co.nz