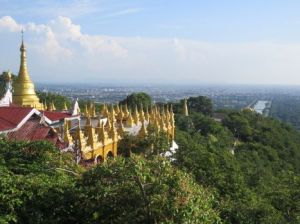 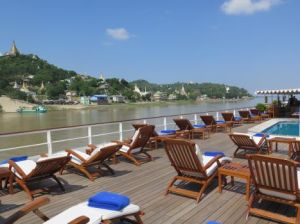 Is river cruising a popular option for first-timers?

Yes, it’s a winner. A bunch of Kiwis and I checked it out last week on a World Journeys expedition, which includes 3 nights on board the Belmond river cruiser, Road to Mandalay. Myanmar’s tourism infrastructure is frantically trying to keep pace with the tourist surge. So the logistics on the ground for independent travel, can be a bit hairy. The Belmond river cruise eliminates those headaches, but also makes a point of connecting you with authentic Myanmar. What really struck me about the cruise is the fact the ship is overwhelmingly staffed by locals, so its been a boon for their respective riverside villages. And the ship’s capacity is 82 passengers, so it’s a pretty intimate, personalised encounter.

Tell us about Mandalay.

This fabled city is an absolute photo feast.   Mandalay is the centre of Burmese culture and Buddhist learning. The wonderful old teak monasteries are  great to explore.  And Mandalay is home to a formidable army of artisans. There’s an entire street dedicated to marble  sculpture. Huge creamy marble Buddha statues, crafted on site. Another great stop are the gold leaf workshops, where the artisans beat the snot out of the gold block for 5 hours, to produce the leaf foil.  Brain-busting work.  But the climactic attraction is to see the world’s longest teak wood bridge at sundown. It’s a 1 kilometre long pedestrian bridge on stilts. Two hundred years old. And its golden glow at sunset is like a walk in travel brochure.

What about the world’s biggest book?

This is really quite staggering. The Kuthodaw Pagoda is a complex of hundreds of small cream pagodas. Seven hundred and twenty nine, to be precise. And each pagoda houses a marble slate, inscribed with the full text from every page of the Buddhist doctrine.

Yes, alongside Mandalay, Bagan takes top billing on the tourist trail. There are over two thousand pagodas and temples scattered across the river plain of this ancient capital city,glinting in the sun. Bagan takes on an aura of glorious abandonment . But a bit like Mandalay, Bah-ghan turns on a sensational sunset show. There are a few towering temples that you can climb to the top of, to watch the setting sun, which illuminates the pagoda-scattered landscape like a golden fairytale. An unforgettable spectacle.

Do you get a taste of village life?

Yes Bagan nowadays is a collection of villages, where much of the daily routine appears frozen in time. We noticed a lot of cattle, basically parked up in the front room of people’s thatched houses. The early morning village markets are a riot of colour and pungent fragrances. The village kids are curious and cheeky. But the Burmese village people themselves exude a gentle, calm demeanour. And the tea leaf salad, is the absolute must-try dish in Myanmar. Similarly, you’ll be welcomed into the monasteries, to here the tinkling of bells, the swishing of the monks red-robes and to see many poor village kids getting educated. Brand new Chinese smartphones sell for ten New Zealand dollars, so despite being very poor, you’ll see the bizarre culture clash of peasant farmers leading ox-drawn carts through fields, while they chat on their smartphone. It’s a country on the march. See it before it changes too much. 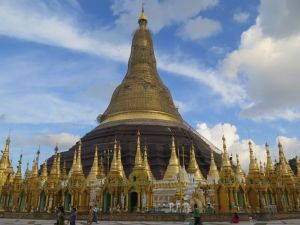 For more details on exploring Myanmar, go to http://www.worldjourneys.co.nz  You can get there with Cathay Pacific. http://www.cathaypacific.co.nz 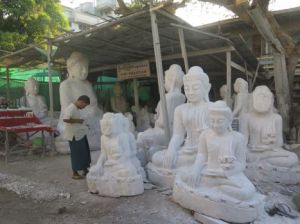