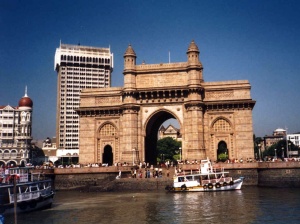 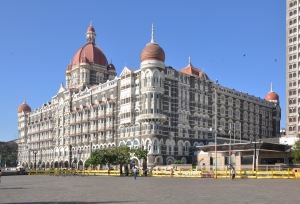 Mighty Mumbai’s most colourful and vibrant district is incomparable Colaba, in the south of the city, considered the prettiest part of town.

Many of its buildings date back to colonial India, fusing old world ambience with the cutting-edge glass towers.

Colaba Causeway makes for an enchanting stroll, with a jumble of quaint old cafes, restaurants and shops touting for your rupees. Heading north, keep an eye out for one of the best Art Deco structures in India, the oldest theatre, the Regal.

Adjacent to the causeway, ferries tootle passengers across to the Elephanta Caves, 9km into the Arabian Sea. The rocky outcrop boasts majestic statues carved 1500 years ago. The island was rediscovered by the Portuguese in the 16th century and takes its name from the basalt elephant they saw as they approached the island.

Sticking with the coastal theme, Marine Drive is the city’s favourite promenade, flanked by its most expensive real estate. As twilight approaches, the golden strip is a favourite with couples taking a romantic stroll. After dark, the parade is festooned with thousands of lights, earning it the nickname of The Queen’s Necklace. Chowpatty Beach is a clean and floodlit nightspot and a great place to sample the popular local snacks.

Take the walk up Malabar Hill for panoramic sea and skyline vistas.

The Hanging Gardens and the hilltop park provide some verdant respite from the steaming metropolis. The city’s other famous stretch of sand is Juhu Beach, which throbs with a carnival atmosphere. Expect to see the unlikely on this beach, including camel riding, dancing monkeys and snake charmers.

For a change of scenery, head to the arty district at Kala Ghoda, where The Prince of Wales Museum showcases thousands of rare artefacts. There’s also the National Centre of Performing Arts, which stages India’s finest productions. Mumbai is home to the insatiable Bollywood industry. There’s a good chance your hotel concierge can arrange for you to catch a glimpse of a lavish film being shot. But whatever you decide to do around colourful Colaba, try to be in Mumbai on a Sunday. The dramatic reduction in traffic will make you feel transported back in time, accentuating the whole experience immeasurably.

The rooftop bar and the Spa at Four Seasons can be used whether you are staying  there or not. For premium tastes, the hotel’s 202 rooms and suites are spaciously proportioned, blending high-tech toys with rich accents of India in its exquisite furnishings.  Details and bookings at ywww.fourseasons.com/mumbai

If you’re in the mood for a little adventure, an Old Mumbai Bicycle Tour is a captivating way to immerse yourself in Colaba’s colours. Running every Sunday morning, in groups of 12, the easy-paced tour pedals past all the top-tier landmarks,  plus some back alley secrets, like the traditional cafes.

Nestled  in a 120-year-old heritage building, Woodside Inn exudes the charm of a neighbourhood bar. I  recommend it highly for a pick-me-up. Founded over a century ago by the Swadeshi Movement, the Bombay Store  stays true to its roots, stocking only indigenously-made products from all over India. For  souvenirs and gifts, the Bombay Store sets the benchmark.

Choose from exclusive collections  of clothing, bed and bath products, tableware and health products.  Superb. There is no better place to watch the sun slink into the Arabian Sea than from Mumbai’s highest rooftop bar, Aer. Covering the  roof of the Four Seasons Hotel, this  is a seventh-heaven experience. Mumbai’s A-listers frequent Aer, so you never know who you could  rub shoulders with. Cocktails are half price from 5.30pm to 8pm. Party hounds can dance  under the stars, with a  DJ belting out funk and house music. Equally popular with the local glitterati is the Four Seasons Spa,  a sanctuary of rejuvenation. Just the way to end a Mumbai foray.