What makes the Isle of Mull such a drawcard?

The Western Highlands and offshore islands are quintessential Scotland. But unlike the Isle of Skye, one of the bonnie Scotland’s less trodden paths, yet most enthralling destinations, is a foray to the Isle of Mull. From the rugged ridges of Ben More and wild moorland to the piercing white sand beaches and wave-lashed cliffs of the coast, Mull is a nature lover’s haven. A natural wilderness that is strikingly diverse and equally dramatic. Wildlife-watching expeditions are immensely popular, and my half day excursion served up close encounters with eagles, otters, dolphins and migrating whales. It is Scottish wilderness, unplugged.

Did the main town of Tobermory inspire the name of the Womble?

Well, after exhaustive personal investigations, I can confirm that this is indeed the case. Tobermory is Great Uncle Bulgaria’s second in command in the womble burrow, and yes, he is named in honour of Mull’s photogenic port town.

Tell us about Tobermory’s top sights.

Tobermory is a picture-perfect fishing port and yachting hub, positively radiant with merrily coloured waterfront homes and shops. The houses were originally fishermen’s cottages, and many have been turned into B&Bs, pubs and artist studios. Often lashed by frigid winds, if you need a warm-up, totter into the boutique Tobermory distillery, which has been producing single malt whisky since 1798. With more than a billion bottles of whisky exported annually, Scotland is awash with distilleries, but this pint-sized producer is a charmer.

The place to stay is the Tobermory Hotel, housed in a series of multi-storeyed, 300-year-old cottages that line the picturesque waterfront. It is seriously like staying in a doll’s house. This great value family-run B&B hotel is renowned for its local cuisine and the evening dining is a showcase of  fresh, sustainable produce.

Is Mull the spiritual home of the world’s McLeans?

Yes, and just a short drive south of Tobermory is one of Scotland’s oldest inhabited castles, Duart Castle. Built in 1360, it is the home of the 28th Chief of the Clan Mclean and his family. Open to the public, the castle features majestic halls, medieval furnishings , authentic dungeons and cannons. An essential sight.

What about the little isle of Iona?

A short hop from Mull is the satellite Isle of Iona. This most historic of outposts was the staging ground for Saint Columba’s great  conversion of the Scots to Christianity. Arriving here in 563AD  from Ireland, he established a monastery on the island, which is also where the Book of Kells was transcribed, before being taken to Ireland, when the rampaging Vikings forced the monks to flee.

From the mainland, Oban is the main gateway to the Isle of Mull. Is Oban worth a stop?

Absolutely worth at least a night stopover. This compact port town has sturdy-stone buildings and a very pretty waterfront, yawning with really old pubs. The grand old dame, the Oban Caledonian Hotel is a landmark property, with dreamy views across the water.  Built in 1882, it was commandeered by the Royal Navy during WWII, so it has heaps of interesting history. 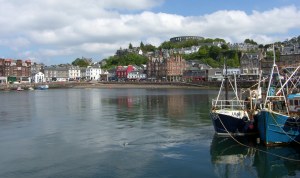 Five minutes north of Oban, the medieval fortress of Dunstaffnage Castle should be on your sightseeing agenda. Built in 1260, it was captured by Robert the Bruce in 1309 during the Wars of Independence. Adjacent to the imposing castle are the poignant ruins of the 13thcentury chapel, containing lots of Campbell tombs furnished with skull and crossbone carvings.

What about Scotland’s answer to Rome’s Coliseum?

Crowning the hill above the centre of town is the Victorian monstrosity, McCaig’s Tower. Its construction was designed to provide work to the growing army of unemployed stonemasons. Inspired by the Coliseum in Rome, the tower is a polariser in the aesthetic pleasing stakes, but the adjoining viewing platforms offer brilliant views across Oban and beyond.

You came across a great family-run car rental company in Scotland.

DCH Scotland is a fabulous, family-run rental car company who claim they won’t be beaten on price. And their customer service is second to none. www.dchscotland.co.uk.

Why do you think Scotland is such a great self-drive destination?

I’ve driven in a multitude in countries and Scotland would be my clear-favourite. It’s smaller than the South Island, the roads are top knotch, traffic volume is low, unlike England, and the scenery is superb.

The main ferry terminal is based in Craignure, where you’ll arrive from the mainland port of Oban. A short drive brings you to Torosay Castle.  Recently sold to a mystery Swiss buyer, this rambling Scottish baronial mansion is currently closed to the public.  However, there is a beautiful woodland walk through the castle grounds, brimming with extravagant classic statuary, sculpted fountains, a Japanese garden, domed folly and rockery. In 2008, the then oldest bottle of Veuve Clicquot  was discovered by chance, inside a sideboard of the castle. The 1893 bottle was in mint condition. The “priceless” champagne is now on display at the Veuve Clicquot visitor centre in France.. The Caledonian Macbrayne car ferry service runs every two hours between Oban and the Isle of Mull. For full details on sailings, jump to  http://www.calmac.co.uk