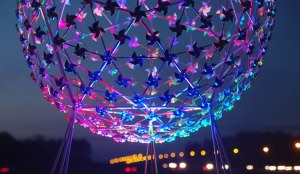 The feisty flap that has erupted over the installation of Neil Dawson’s Fanfare is a welcome sign that normal transmission is resuming in Christchurch. It’s a classic Christchurch dust-up.  Leading the charge sheet of objections is its location. Could there be a more desolate, dishevelled setting , aside from Birdlings Flat, than Chaney’s Corner? Supposedly, plonking this glorified glitterball at the city’s northern entrance will transform Chaney’s Corner into “an extraordinary gateway.” I think this will be completely lost on unsuspecting visitors who are far more likely to think they have taken a wrong turn or fallen down a rabbit hole and ended up in Boogie Wonderland. The second big objection is embracing  a hand-me-down from Sydney, even though former mayor Garry Moore lobbied for it.  Cast-offs and rip-offs are never a good look. ( Did you know, by the way, that Christchurch shamelessly pinched Singapore’s marketing by-line, “A City in a Garden”, to launch the central city blueprint?) But as much as Fanfare is a discarded sparkly leftover from Sydney’s 2005 New Year’s Eve bash, Neil Dawson is a hometown boy. We have come to love his Cathedral Square sculpture, Chalice.  So where should Fanfare be installed, given the city council has already forked out big bucks on the project? I did chuckle at the impish suggestion from a Press reader that it should adorn the Chalice, turning it into a single-scoop ice-cream. Fanfare deserves a central city location. I think it would look spectacular in Victoria Square, or along the widened riverbank of Oxford Terrace, in the heart of the entertainment precinct.

It has been fascinating to follow the O’Loughlin’s legal battle against Tower in the High Court this week. Justice Asher’s ruling will have widespread ramifications for owners, who are seeking full replacement cover on “repairable” red-zoned homes.  I was perturbed by the grossly over-estimated rebuild cost, submitted by World Claim, who stood to make a rapacious 28% commission on any settlement. Are these international ambulance chasers really serving the public interest?

Hurling physical threats and abuse at EQC and Fletcher EQR staff is indefensible, even if you’re at boiling point. The razor wired, fortressed-fencing of the Fletcher EQR  base in Bower Ave, looks more like a gang pad than a home repairs hub. 32,000 homes have now been repaired, with 50,000 to go. Both of my neighbours’ homes have been repaired and the quality of work is outstanding. The EQC’s stated goal is to ensure all homes with repairs over $50,000, are completed by December this year. Yet, why are residents, awaiting repairs, kept in the dark as to exactly when that work will begin? Lift your game, EQC. Give people clearer dates.