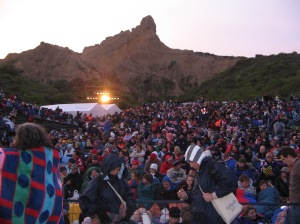 About 3 hours drive from Istanbul, Gallipoli peninsula is perched at the entrance to the Dardanelles, a pencil-thin body of water that links the Med with the Black Sea and Russia. Whoever controls the waterway, controls access to Eastern Europe. For New Zealanders, the Allied campaign tried to capture the peninsula, and the waterway, which would have knocked the Turkish Ottoman Empire out of the war.

Gallipoli Peninsula is a lot bigger than most people realise, right?

The first time I laid eyes on Gallipoli, I was staggered by just how sprawling and steep it is. I was working on a Greek cruise ship in the late 90s, and the ship used to sail by the peninsula, and stop at Cannakale, en-route to Istanbul. The peninsula is about eighty kilometres long and has some very high, craggy peaks including the location of the New Zealand monument at Chunk Bair. It is so high, you can spot the monument from the sea.

You’ve done the ANZAC pilgrimage several times. Has it become a rite of passage for young Kiwis and Aussies?

It’s certainly a popular pastime if you’re doing your big OE in Britain, with tailormade backpacker trips operating from London. I don’t know of any other place in the world, where tens of thousands of young Kiwis and Aussies gather on a frigidly wind-swept shoreline, and keep vigil through the long night, to pay tribute to our forebears? It is a remarkably unique ritual.

How powerful is the Dawn Service? 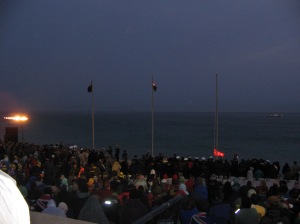 It is epic. The ultimate spiritual experience. Just before the dawn service starts, a thick fog of silence seems to blanket ANZAC Cove. Everyone is standing. Heads are bowed Goosebumps envelope your body. Your thoughts turn to the all-out terror that must have confronted those first ANZAC landings, after their nervous wait on the water. And the first shaft of light heralds the start of the service. It’s the playing of the national anthem, which carries so much pathos at Gallipoli.

What about the New Zealand service at Chunk Bair?

Yes, well after the Dawn Service, a variety of national services take place, including the New Zealand service at 2pm, which is the final act of the day.  It’s very patriotic, with lots of New Zealand music. But of course our notion of pride pales in comparison to our neighbours. A lot of young Aussies rock up to Gallipoli fully clad in the national colours. Many bring up blow up kangaroos, and many are draped in green and gold face paint, as if it’s a one day cricket game. But that’s what we love about them, right.

What about the Turkish hospitality?

I suppose the great legacy to emerge from the Gallipoli fiasco, is New Zealand’s beautiful relationship with Turkey – the modern nation that emerged from the embers of the Ottoman Empire. I think the Turks are incredibly generous, warm-hearted people.  Interestingly, Turkish kids know Gallipoli, as the Cannakale Battle, in which there were one hundred and seventy thousand Turkish casualties, defending the Dardanelles and giving rise to their democratic republic.

Aside from the battlefields, what other tourist sights are in the area?

Well, Cannakale, the main port town, is a cracker. A lovely coastal town that is wonderful to relax in, before and after the Gallipoli experience. And of course, Ancient Troy, one of the most legendary haunts of the Ancient World is very nearby, which is well worth exploring.

Obviously there’s a lot of interest in the 2015 Centenary. How many Kiwis will be allowed to attend?

A massive contingent of VIPs and officials will attend, so public crowd numbers have been dramatically capped. The backpacker trips from London won’t run for the Centenary. The New Zealand allocation is two thousand public tickets. And in May, the government will announce how the public ballot for those two thousand tickets will take place. There will be no charge for the tickets, but they will be non-transferable, so you can’t hock them off on Trade Me.

How can people register for the Centenary Tour? 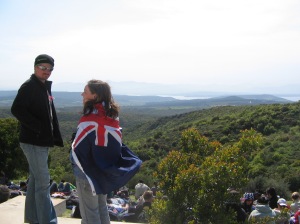 A New Zealand company, Innovative Travel, has been operating specialist ANZAC Day tours for quite some years, and they are closely aligned with the Centenary planning. I have hosted two group tours to Gallipoli for Innovative in recent years, and I’m leading the 2015 tour. So, if you want to register for the two week Centenary tour, you can do so now, and Innovative will keep in close contact with you about the ballot. The details are on my website, or just ask your travel agent about the Innovative tour to Gallipoli.

The Innovative Travel Company is proud to offer you an unrivalled journey, taking in the highlights of Turkey. Starting in Istanbul, visiting the capital Ankara, the surreal areas of Cappadocia, the limestone terraces of Pamukkale, the UNESCO site of Ephesus and ending with the highlight of attending the Dawn Services at Gallipoli for the 100th anniversary commemorations, side by side with fellow New Zealand & Australian countrymen and dignitaries. The tour includes a full 3 nights based at Cannakale, just across from the Gallipoli battlefields, enabling you to maximise the experience.

The visit also presents a chance to see the historical places our soldiers saw and to learn much more of the great civilisation of Turkey, in a spectacular combination of famous and honourable sites. This special journey is for those who want something more than a brief tour to traditional destinations. It will require fortitude and fascination, and an eagerness to take the trip of a lifetime.

Early registration is essential to secure your place for this once in a lifetime event.

Mike Yardley is an award-winning broadcaster, mixing his twin passions for news and travel. Based in his hometown of Christchurch, Mike is a current affairs commentator/writer and widely syndicated travel columnist & correspondent on radio and in print. He is Newstalk ZB’s travel correspondent, with a weekly slot on the Jack Tame Saturday Morning Show. His weekly travel page is published in a dozen APN regional newspapers. After 20 years as a front-line host on Newstalk ZB, Mike steppeddown from the Canterbury Morning Show just before Christmas, after guiding Canterbury listeners through the horror, heartache and turmoil of the natural disaster. In 2012, he was honoured for his dedication to the job, winning multiple awards, including a Gold Medal for Best News Coverage at the New York Festivals, Talkback Host of the Year at the New Zealand Radio Awards, and an Earthquake Service Award from the Christchurch City Council. Travel has been an abiding life-long passion. Mike has travelled to 77 countries, worked on-board a Greek cruise ship, and in addition to his travel media work, has been an international tour group leader in recent years. Mike has led two group tours to Gallipoli for the ANZAC Day commemorations and is greatly looking forward to returning to Turkey for the 100th anniversary.

Or see your travel agent and ask them about Innovative Travel’s Gallipoli 2015 tour.