Chester probably isn’t one of the first British cities that tops the list for visitors. Why is that?

Well, I suppose we tend to travel a bit like sheep, and a trip to the UK will normally be headlined by London, Stratford, York and Edinburgh. But beyond the big four, Chester is a top spot amongst second-tier towns, particularly because of its architectural richness, that lies within the giftwrap of the red sandstone city walls. In fact  Chester is the best preserved walled town in England, more complete than York. 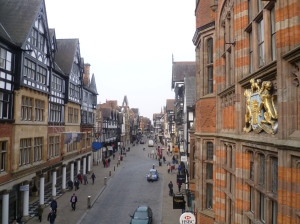 What about the legacy of the Romans? You can walk the city walls?

Yes, and it’s the best way to get a sense of Chester’s unique character. It’s a 2-mile  elevated circumnavigation of Chester’s historic centre. The red sandstone walls were originally built by the Romans in 79AD, when the city was called Castra Devana, the largest Roman fortress in Britain. The Anglo Saxons and the Normans altered the walls over the centuries, but their current state dates from 1200AD. There is a staircase built in the walls called the Wishing Steps. Local legend claims that if you can run up and down these uneven steps while holding your breath your wish will come true. Although I am still waiting for my wish to granted.

The amphitheatre was only recently excavated, right?

Well, in 1929, a large curved wall was inadvertently discovered by workmen , when they were constructing an underground boiler room. And to cut a long story short, they unearthed what has turned out to be the largest Roman amphitheatre ever built in Britain. A seven thousand strong seating capacity. Much of the site was only fully excavated eight years ago, so its now fully exposed for the world to see. And many of the most precious items unearthed during the big dig are on display at the museum.

If ancient rocks, walls and amphitheatres don’t really rip your nightie, Chester’s medieval shopping arcades will win you over. The original rows were built in the 13th century, and it remains a mystery why these long shopping galleries, that straddle the street were designed in double decker style. But they are utterly charming, and somewhat frozen-in-time. Most of the buildings are designed in Tudor style, with black and white timber-framing. Some of the replacement buildings are Victorian. But this distinctive shopping complex is definitely home to Britain’s oldest shopping arcades.

What is so significant about the Eastgate Clock?

There are many features along the walls, but the most eye-catching is the prominent Eastgate Clock,  a masterpiece artwork which was built for Queen Victoria’s Diamond Jubilee. It is the most photographed clock in England, after Big Ben.

There’s certainly no shortage of photogenic churches. The two must sees are Chester Cathedral, which has all manner of famous Dukes and Earls buried within. But it’s the Church of St. John the Baptist, which I found far more fascinating, simply because it dates back to 689AD and there are remnants of the ancient church merged with the later Norman church. So history buffs will have a field day.

British Airways has made some changes for Australasian travellers?

BA has been flying Down Under for 77 years, and last month, they have just introduced their brand-new 777s to the Sydney London route via Singapore. From New Zealand, the connections to Sydney on Qantas are precision-timed so that your layover is kept to a minimum.

How would you rate the BA flying experience?

I think there range and depth of movie options, and the in-flight food and beverage service is top knotch, whether you’re in Club World or World Traveller. I really enjoy the BA flight attendants very easy-going but savvy demeanour. They’re very British, very classy, but always up for a laugh. An excellent airline option to get to the UK and Europe.

( As discussed by Mike on Newstalk ZB’s Jame Tame Show. May 4.) 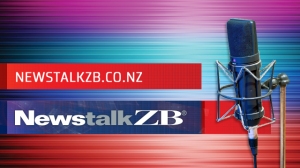 Chester Grosvenor Hotel is a magnificent one-off hotel experience in the heart of town.

British Rail has easy connections from London and Birmingham to Chester.